This Dysfunction Goes to Eleven

When this experiment started one of my goals for the first time box/iteration was just to see if I could actually give up my Things task list and follow the practice with a board. I had tried a number of other productivity frameworks and found that only pieces of them stuck. (Someday someone will write on a book on how to finish David Allen’s “Getting Things Done” book and I’ll actually get all the way through it.) And while I know that limiting work in progress is a cornerstone of this type of approach, and I did set WIP limits, I decided to be a little loose with the limits since I was just guessing at what they should be.

Because my larger plan is to test out different approaches to Personal Kanban, I wanted to start as simply as I could manage. I created a task board and began to fill it with post-its. The first lesson I learned was that I had far too much in my to do list to fit on my Kanban board. I decided to limit it to the things that seemed to be the most important at the time.

The Architect of my Own Demise

The most basic way to set up my board would have been to create three columns: On Deck, Doing and Done. I know this. However, when I sat down to work on it, I began struggling with how I would be able to visually understand the different types of things I had to do. My plan was to use this not just for work, but for my whole life. So, I made a decision to start with multiple swim-lanes. This is a choice I can’t say I was entirely comfortable with. It seems to violate (my current understanding of) one of the basic premises under which this system is designed to work.  But… (I bargain with myself) baby steps. I decided that this would be an okay thing to try while I am working on coming up with a better solution.

I started off by dividing my Backlog up into 5 swim-lanes, each feeding into it’s own On Deck and Doing columns (instead of having just one of each). I was able to limit myself to one column for Done though. The reason for this is that there were/are so many things I felt compelled to work on that I was afraid if I put them all in one box, without some kind of designation, I’d lose sight of something critical. (Yes, I realize this is a broken way to look at it.) There was also a part of me that was curious about how I would work through the prioritized items once they hit the On Deck boxes. The swim-lanes I set up were:

So here is my basic organizational system: 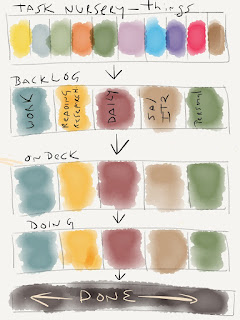 Even with the swim lanes I was still concerned about understanding the tasks on the board. Not so much from a priority standpoint, because I can handle that pretty easily with the On Deck backlogs. The desire for clarity is more about having a visual way to quickly understand that a given task is related to (work, personal, reading, etc.) This should have been easily handled by the swim-lanes, but there were sub groups I felt I needed to identify even within the lanes. So, I began with a variety of different sized and colored post-its, each one loosely designated to belong to some kind of additional detail on a task.

One of my challenges was (and continues to be) defining “value”. I believe the multi-colored, multi-sized post-its are part of trying to define that. There are tasks that obviously provide direct value to customers, like send Client X a demo license. There are items which provide indirect value to my ability to do my job: Read the new book by Diana Larsen book, “Liftoff: Launching Agile Teams and Projects”. There is work I do volunteering for organizations which provides value for others: Review submissions for Scrum Gathering. But there are other things I do which appear to be valuable only from the perspective of their impact on my body, brain or mood. How to capture this value in relationship to other items in the list continues to be a struggle and is one of the reasons for the multiple swim-lanes in my board. (How for example do I quantify and prioritize based on value if what I am comparing is the value of sending a client a demo license, compared to the mental health boost I get from meditating each day, or maybe just sitting back to read a comic book for fun.

It would be easy to argue that the non-work items do not provide value to a client and do not need to go on the board. But that seems to me to be a pretty thin definition of value. My goal was to try to put everything on the board. The problem was, it didn’t all fit. . One of the most important things I learned that week was that if I don’t put it on the board, it isn’t going to happen. So, I needed a kind of backlog nursery, where I could dump ideas and then periodically replenish the backlog on the board from that nursery.

I decided to hold a little personal retrospective at the end of each week to evaluate how things are going. The first week was really difficult for me, not because following the process was hard – that was actually pretty easy. The hard part was that Nigel Tufnel stopped by to crank the volume on my “obsessive tendencies” up to 11. Here are the important (and painful) things I learned about myself during week 1. 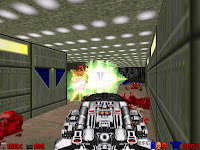 At the end of the first week, I know I have a long way to go. I’m nowhere near ready to deal with WIP, the waste I am creating or finding a better way of doing this. But, it’s a start. And, by the end of the week I was able to start talking myself down off the ledge of obsessing about moving the cards....

But, they say admitting you have a problem is the first step to recovery. 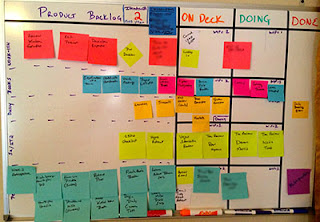 Here is a snapshot of my board as I got ready to start on the 2nd week.