The iPad 2 and Project Management 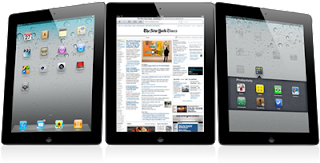 Last year when Apple unveiled the iPad, I, along with countless others were overcome with that all too familiar craving for new gear from Cupertino. Having tried and quickly abandoned several tablets running the other operating system, I was hopeful that the iPad would gain the acceptance it has rightfully earned, but as a project manager, I was mostly curious about how this new device would fit in with my job. The Windows tablets I had tried in the past always seemed to make my job harder. So, when I purchased it, I wasn't exactly sure what I was going to do it… but like I said… The craving…

Since then I've found a number of ways the original iPad enables me in managing projects and best of all, I'm able to use it with Merlin.

So last week when the new iPad was introduced, I was mostly focused on trying to figure out how this new model would enable project managers in a way the first generation didn't. The increase in speed, the lighter form factor are all very cool, but as a PM, those aren't really problems for me when I use the first version. The two enhancements I see in the new model that I think will have the greatest impact on project management, and the workscape in general are the HD video connection and the cameras. Here's why…

The first version of the iPad is a strictly personal device. When I first got it, I spent a lot of time trying to work out how it could be used in a collaborative way. With it's size, ease of use and connectivity, it seemed like it might be viable as a shared device. I was originally thinking it might serve as a great replacement for an Agile task board, and instead of standing around a board, Agile teams could pass it around the war room when they were together, and then, with the connectivity, it could serve virtual teams as well. But, there's not an App for that. The closest viable thing I found was Google' chalkboard - which was cool, but too small to be of any real use. With the new video out and the ability to show the whole screen, we have something even better. In meetings, rather than standing and working at a whiteboard, or a flip chart, we can work on the iPad and have the video show up on a screen. This will give us the same capability to work freehand by using any one of the apps that lets a user write and draw with their finger tip. When we're done, we can store the file in the cloud and share it with whomever we need to.  This may not seem like a big deal at first blush, but think about all the time you spent (or have spent) typing up or otherwise capturing information from a whiteboard of flip chart. This would completely remove that step. Yes, we can take pictures of what ends up on the whiteboard or flip chart in a  meeting, but it isn't as easy to recall those and update them later when we need to. As soon as someone creates an App that will also record audio and tie it back to the graphic file we create, the iPad will begin solving the same need that both Livescribe and Papershow solve. If the Gen 1 iPad gave us new options, the Gen 2 has the potential to deliver an easier way to work. Given the volume of work most PMs carry nowadays, this could be very significant. (Plus, we could end up with a lot less conference room doubling as storage for those electronic white board that always seem to be broken.)

The new cameras brought me back to something I have been thinking about since the set up was first introduced in the iPhone 4. Project Managers spend a lot of time writing, (editing, correcting, explaining, etc.) status reports. Our job is primarily one of communication and status reports are a critical part of that. However, we now have another option. It may take awhile to become accepted, but it would enable us to communicate far more effectively, in less time, than what we do now.  With the self-facing camera it is easy to shoot a quick video and export it to email or iMovie. With the new iPad (or iPhone) PMs could record video status reports in short video status segments, tag them so that it is clear to anyone watching what the relevant topics are, and then post those. (In Merlin, you could even store them in the project file as elements.) Once we have all our snippets done, we could use iMovie on the iPad to assemble a full status report and post that as well. So, for those who want just the pieces relevant to them, they are available. For those who want the full report, we have that too. The argument against this is likely to be that it is faster for a consumer of our status report to just scan through ti quickly if it is written. That may be true, but writing is a limited form of communication when you compare it to video. Think about how many status reports, emails, etc. have been misinterpreted because all the reader had to go on was text. With video, you get facial expression, vocal tone and all those other nuances that can help someone get a clearer picture of when the PM is trying to convey serious concern, or even just make a joke. Think about all the communication struggles we continue to have in working with geographically spread teams and how much of that could be addressed if we were simply able to add additional layers of communication through voice and facial expression. Yes, scanning a text document may be faster, but the question is, does that quick read really provide an effective enough method of information consumption? This one may take a little while to catch on, but it would be hard to argue that increasing the depth of information it offers could do anything other than benefit a project and the people involved.

In both of the above examples, the new iPad has the potential to change how we handle our day to day work as project managers. It may not be Angry Birds, but if it can save you time and help you collaborate and communicate more effectively then it may be as magic as they claim.