Day 3 of the Gathering started out with the follow up to Open Space. Around the room, participants shared their impressions of the Open Space and the gathering as a whole. There were a number of people who spoke up as being supportive of, or cautiously optimistic towards the PMI presence.

When PMI Agile Forum leader, Jesse Fewell gave his presentation exploring the differences between Scrum Masters and Project Managers, people were spilling into the hall. And this time, the attendees extended beyond the small cadre of folks who attended the Day 2 sessions and included folks like Jeff McKenna and Tobias Mayer. It was a lively discussion and raised a number of interesting ideas that seemed to center around the role of the PM/Scrum Master as an agent of change who is there to transform an organization, and enable them to become more “healthy”. If the PM/Scrum Master is to play that role, what is the best way to go about it? The session definitely helped bring to light the fact a lot of people are trying to figure out how to make sense of the whole idea of PMI and Scrum co-existing and how that impacts the person who is responsible for “leading” the effort.

After lunch there was a panel discussion with Ron Jeffries, Mike Cohn, Jim Coplien, Alistair Cockburn and Ken Schwaber. (For those of you keeping score at home, that is 3 of the original signatories of the Agile Manifesto.) This was a very special gathering of some of the brightest thought leaders in the software world. They held court, debating and answering all the questions thrown at them. One of the best lines of the afternoon came from Ron Jeffries “There is no really good idea that can be measured by the number of people who adopt it.”

Once the panel was over we had a chance to do some video interviews that will be showing up in video podcasts very soon.

From the moment I arrived I felt challenged by the people I got to speak with and the ideas that were shared. It was my second Scrum Gathering and I find that it truly is a very organic moment of really sharp people who aren’t afraid to push each other. The only real complaint I heard the whole time was from one attendee who just wanted to be pushed even harder than he had been.

In a week or so I will have the video podcasts edited and posted. Until then, I want to say thank you to Greg Balestrero, Mark Langley, the IS SIG, the IT&T SIG, the steering committee of the PMI Agile Forum. We did well. People seem to be thinking it is okay to talk about PMI in the context of the Scrum Gathering. It may not entirely make sense yet, but the message that it was okay to try and figure it out was clearly heard.

I also want to thank the folks from the Scrum Alliance – especially Ken Schwaber, Mike Cohn, Jeff Sutherland, Jim Cundiff, Jodi Gibson and Stacia Broderick. I hope that we will be able to return the support and hospitality shown to the PMI community over the past few days.

I’m not sure how I am going to dry out from my recently developed Twitter addiction, but I will probably have to keep posting messages to @msliger, @mcottmeyer and @jessefewell until I can shake it off.

Day 2 at the Scrum Gathering is about Open Space. If you’ve not been to one before, it is a very organic experience. There are very few rules, but one of them is that the attendees propose topics at the start of the day.

Jesse Fewell and I both stood up to propose topics. Jesse held a session for all the folks interested in PMIAgile and I held one that was intended to be a place where anyone who had issues or concerns with PMI attending the Scrum Gathering could come and talk about their issues with it. My hope was to capture the concerns and take them back to PMI.

There was a good turnout in the room and it was a very lively debate about the different ideas/concerns around the topic. These will all be posted to the wiki on the Scrum Alliance site as soon as I get home, but there were a few things that struck me today around the whole PMI and Scrum Alliance topic.

The first thing I noticed was that people keep getting hung up on the language issues and concerns about how to map which process to what in the other. This presents a significant hurdle for a lot of folks. “If I do X in your process what is that represented in my process?” The problem with this is that the real issue is not a semantic one, or a mapping one. The real problem is the fact that there is no focus on intent for the people in this conflict. Both approaches want to solve the project as quickly and efficiently as possible. There are different ways, but sadly, a lot of people are too busy making sure they are firmly planted in one camp or the other to understand that it really just does not matter because it is about doing the work.

Having typed all this, I should confess that I do have one concern coming out of day 2. I have had discussions with a number of folks about the role of a project manager in Scrum, or the role of a Scrum Master in project management. Each has a pure approach and for me, in what I do, I blend them together whenever and however I need to in order to get the work done. I do not feel compelled to take up for one side over the other and I don’t believe either is better than the other. I think it depends entirely on the people doing it. Two concerns here: 1) Most people are too caught up in semantics to worry about the intent to deliver and 2) How much of a threat is my approach to the purists? There are a lot of people worried about how PMI might impact the Agile space. There isn’t really anything in place to prevent something bad from happening beyond the people involved.

Anyway, I had some great conversations today, especially with Tobias Mayer, the folks who attended the Scrum Sessions and Michele Sliger.

One more day. I’m looking forward to getting some interviews tomorrow.

Email ThisBlogThis!Share to TwitterShare to FacebookShare to Pinterest
Scrum Gathering… Day 1
It was a very good day and I’ve been twittering under @pmiittelecom for most of it and will do so on Tuesday as well.
Some of my favorite moments from today…
Jim Coplien and Jeff Sutherland presenting “Not your Grandfather's Architecture: How MVC has evolved into the Agile world”. I walked in a few minutes late… just in time to hear Coplien say that any member of any scrum team should be able to explain the architecture on demand at any time. He said, if you can’t your team is sub-optimal. I think any time you can go to a conference where, within 15 seconds of walking into your first talk, someone has challenged the way you manage your work and look at the world, it is a very good thing.
……
Throughout the morning, there were a number of us twittering about the presentations. This led to a sub-conversation that rode underneath the actual presentations being given. Later, in the halls, we got to talking about whether or not it was rude for us to be typing in session, while people were talking. The general consensus was that it is. But, what if someone is twittering about your presentation? It is, basically promoting you – and giving you free PR. The consensus here, was that if the speaker didn’t know whether or not you were answering email or twittering, then they would perceive it as rude and that is why it is not a good thing (which none of us stopped doing all day). So, I’m wondering if it matters that the driver of good behavior, in this case, may not be the desire to be present and focus on the speaker and engage in their presentation, but simply to not appear rude to them.
……
Last year, I came to the Scrum Gathering as a kind of emissary on behalf of the IT&T SIG. I wanted to see if we could build a bridge between the IT&T SIG and the Scrum Community. Today, Greg Balestrero, the CEO of PMI gave the lunchtime keynote presentation. He did a very good job of engaging the crowd and conveying the message that PMI is an evolving organization that is interested in learning how to work with the Scrum Alliance. The response was very largely positive. People seemed generally hungry for things to move forward. The best part of his talk was the end where he paraphrased a conversation he and Ken Schwaber had held the night before. The basic message they wanted to jointly get across today was to tell everyone in both camps to “stop whining” and that they “have permission to move forward”. From my perspective, this is a very, very good thing.
……
One thing I saw today, that is something I’ve never seen at a PMI conference, was when one of the CST’s left lunch early because he was so worked up about what he’d been running through in his mind that he needed to leave the lunch to go put it down. It is very energizing to be around folks who are genuinely turned on by what they do.

The only drag so far was that Michele Sliger and Gabrielle Benefield both spoke at the same time I did. I would have like to have seen both of them present.
I’ll be posting more tomorrow and will be shooting some video interviews as well.

Posted by Dave Prior at 1:39 AM No comments: 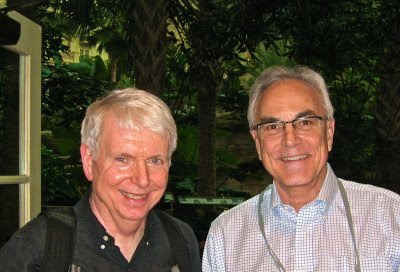 Greg, Mark, Ken, Mike, Jeff, Jodi, Teresa, Jesse, Michelle, Stacia, Gabrielle, Bob, Laurentiu, the Board of the IT&T and IS SIGs, the PMI Agile Forum Committee, everyone at the Scrum Alliance, all who attended the special event this evening and most of all,

Thanks. There were two amazing launches this evening. I am quite proud to have witnessed both!