Tim Ferriss, author of the 4-Hour Work Week, 4 Hour Body, and 4-Hour Chef recently launched a new show, The Tim Ferriss Experiment, on Upwave.  (You can also find it on iTunes.) In each episode, Ferriss will take on the task of learning a new skill and getting good enough at it in five days to prove his abilities in some type of high-profile demonstration. The show follows some of same basic principles also covered in JoshKaufman’s The First 20 Hours.

Basically, the idea is that by following a specific process, you can take anything you want to learn and in a short amount of time, develop a “good enough” level of skill/knowledge to get by.

In Kaufman’s chapter on learning the ukulele and how part of what makes it work is that you have to set some pretty high stakes for yourself. In his case, performing at a speaking event.

Segway to The Tim Ferriss Experiment…

Tim Ferriss is an amazing human example of transparency and being open to the possibility of failure. I love the fact that he’s hacking his own life in public and that this is how he makes his living. I also think the idea of outsourcing the stuff you don’t like doing is great, in theory… but whose going to change the cat litter? (An argument for another post…) 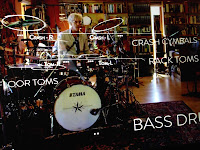 In the initial episode of The Tim Ferriss Experiment, Tim decides he wants to learn drums. The program has a very Myth Busters/How It’s Made vibe. Ferriss has 5 days to learn to play drums well enough to play “Hot Blooded” on stage with Foreigner in L.A. He’s got a few people helping him out, including the rhythmic god, Stewart Copeland, drummer for the Police. Ferriss also has a drumming teacher from The School of Rock in LA help him out. This is the part where the show reeled me in like a starving fish. The line at the bottom of the screen about drumming together being like paired programming. I’m not really convinced it is 100% accurate, but it was a cool geek tidbit. (And with any luck, the masses will very soon begin misusing “pairing” with the same degree of ninja like expertise they employ in misusing the word “agile”.) 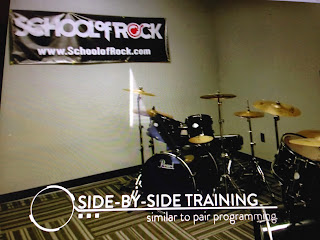 In another segment of the show, Ferriss talks about how he always tries to find things to do that are scary for him because it is a way of inoculating himself against the fear of failure.  This is also quite brilliant.

But then the scary part...

Ferriss has a massive world-wide audience. People who read his books look to these books for advice on how to improve the way they approach their work in order to make their lives better.  In his 80/20 approach, Ferriss is going to be learning to do new things in each episode. He’ll get “good enough” at 20% of something to deliver 80% of the value.  This is more, or less the same approach Josh Kaufmann promotes. And I think, if you are applying it to a hobby, that is great. But, my deep, dark, wake me shaking in the middle of the night fear, is that people are going to see Ferriss applying this to pretty high profile gigs (like being a professional drummer), and a new trend will emerge. We will suddenly have an ocean of professionals whose goal is to just learn 20% of a skill so they can get by stumbling through 80% of a task or job ...

and I may have to work with people who think that is ok.

And that makes me wanna get my Gran Torino on...