Fortunately, I was able to talk myself down… probably by spending the same insane amount of money on a book I haven’t read.

When I found the app for the iPad though… I really compelled to test it out. And, it is very pretty to look at. I used it for several weeks… or rather, I tried to, did I mention it is very pretty to look at? This posting will concern it self with my review of the app. (Next week I’ll talk about what happened in between my attempts to get my world sorted with Kanbanfor1.)

Kanbanfor1 is laid out in a very clean, basic way. You get boxes for the following: 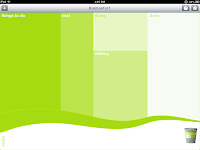 You also get a trashcan where you put the notes when they reach a state of whatever comes after done… ascended maybe? 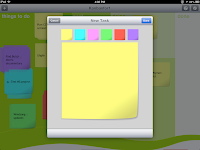 The app is about as basic and simple to use as it could possibly be. There is a box with a “+” sign in the top left of the screen. Click it, and you get a New Task pop-up. You enter the task description, select from one of 6 colors for your task and click Done.  The task shows up in the Things to Do column. You can move it across the board. That’s it. That is all it does. I love that. It is what made me want to try it. ... (Once I came to grips with the fact that if there is a Kanban app that allows for online/offline access with sync. I am unable to locate it.)

I placed a task of each color in the notes field and used the names from the swim lanes on my physical board. I then replicated all the tasks from my board into Kanbanfor1. As far as I know, there is  no capacity for WIP limits in this app… it is bare bones, but kind of elegant in its’ simplicity.

(And did I mention it is pretty?)

While I knew this was going to be an issue, I underestimated how annoying it would become.  What I store on my iPad is only available on the iPad. This is great when I’m teaching a class or sitting on the couch, with my iPad. This is completely useless when I am trudging through an airport with a ridiculous amount of luggage. So, in those moments, I’m back to Things…, which I then re-enter into Kanbanfor1.

This lack of constant access didn’t seem to me like it should be a big deal. In practice though, I noticed that rather than updating as I go, which I do with the physical board, I was just not doing that with the app on my iPad. I ended up just capturing things at the end of the day. A subtle difference, but it meant that when I was posting the updates, I was having to look through all the tasks, figure out which ones I had completed and move them from Things to Do into Done. I lost the value that comes from the staged movement, and I lost the boost from moving it into Done when I completed it. 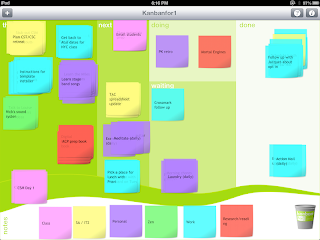 board. Sure, you can pinch and zoom, but it just makes the stickies larger too. If you have 10-20 things to do, this board is great. If your backlog has 30-40 things in it, this board is tough to work with. At least if you are going for that whole big, visible information radiator thing. In order to get all my tasks on the board I had to create stacks. So, in "Things to Do" I have a stack of things I have to do for work. There may be 10 things in there, I have to just stack them up, maintaining priority is not easy – you have to unstack the tasks one by one, and then restack them. (If you happen to suffer from something in the neighborhood of OCD, you are looking forward to hours spend restacking tasks in priority every time you want to work in a new item.) 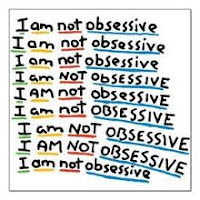 So what I end up with (sans the WIP limits) is stacks in each of the boxes. While I love the simplicity and I think the way the app is designed makes a lot of sense, for someone who is carrying a lot of tasks, this board will simply not work. I think if there were some capacity to manage the height of the boxes, or the size of the tasks, it may work better. Unfortunately, at least while I was testing it, this was not the case. If, however, I had a more manageable set of Things to Do, and I was always going to have my iPad with me (the way I do my phone), I think this app would be a perfectly fine solution… even without the syncing.

If anyone who reads this can recommend an app that offers online and offline access with a sync to reconcile changes, that is available on IOS, please let me know. I have been researching them, but so far, it is all about the cloud. I think the cloud is great, but when I’m stuck in the actual clouds for several hours at a time, I need to be able to enter new items and make updates.