What if you mix the mayonnaise in the can, WITH the tunafish?


By week 6 I felt like I had begun to get the hang of a basic working practice of doing Personal Kanban using a physical board. I definitely still had room for improvement, but I felt ready to start on the next phase of this experiment  - tracking the work using an electronic board. Another reason I wanted to begin this phase was that I was about to begin traveling and teaching again.

The questions I initially had about this were:

There were a number of concerns I had about each of these questions.

When I am teaching Scrum classes or coaching I always advocate starting out with a physical practice of working with a board on the wall whenever possible. There are two primary reasons for this. 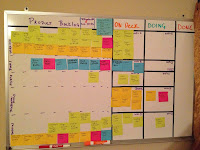 The first is that when people are adopting an Agile practice, doing the work with physical tools allows the practitioners to develop their own working version of Scrum. Once they have established their practice, they gain clarity on what they need a tool to do for them. If they begin with an electronic tool, they learn to work the way the tool works. Each of the tools offers it’s own take on Agile and this may, or may not work to the benefit of the practitioner, but more often than not I’ve seen people rely on the tool to drive their habits (or provide them with an excuse for not applying some aspect of a practice.)

The second reason is that while it may not seem like a big deal, there is a psychological boost that comes from walking up to a board and moving a card into the Done column. It’s not a huge boost, but it is a good feeling to physically do that. If you can do it multiple times a day, there is an increased sense of accomplishment and this helps drive the practice. While I do think there is also a boost from doing the same in electronic form, I have not personally found that to be as positive an experience.

Since I was still in the beginning stages of training myself to work this way, I wanted to make sure I would be able to find a tool that would allow me to maintain the good habits I was developing, while allowing me to continue to experiment. I also wanted to make sure that the process of creating a task, or moving a task would be as simple/easy as writing something down on a post it and moving it across a physical board. My assumption was that if the tool proved to be more complicated to use than a physical board, I would be less likely to maintain or improve on the habits I was developing. Anytime using software becomes more difficult to use than paper it makes work harder. That would obviously work against my goal for this entire project.

Fitting it All In

When I made the decision to try to include everything I do on the board my board became pretty crowded. I even had to switch to smaller post its in order to be able to fit everything. My goal was to find a tool that would allow me to keep all the work in one place, but it also had to be stored in a way that was big and visible enough for me to be able to see everything all at once. 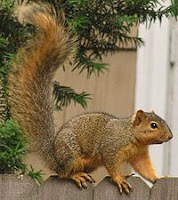 This was the biggest challenge for me. I have spent the last two + years teaching myself how to stop letting things slip through the cracks by relying on Things and Evernote. Both of these tools allow me to work on multiple devices and then have changes sync up when I reconnect. Basically, whenever I think of something I need to do, or encounter information I expect to need later, my goal is to get that thing out of my head and into something more responsible than me as quickly as possible. I have too much to do and sometimes I forget stuff. I’m also often easily distracted by the “OH LOOK A SQUIRREL!” factor, and I get ideas and find information in odd places when I am not connected. In working this way I have definitely developed a habit of putting more in Things than I can do, but this has helped me keep things from completely slipping through the cracks. Several times a day I review the list of items I have placed in the Today section of Things to clean it up. I do end up moving deadlines on tasks quite a bit, but having them there at least helps remind me that they are there and probably should be dealt with at some point. I also periodically review the items that have moved out of Today into Someday and do my best to cull the herd.

Evernote is like the junk drawer for my brain. It allows me the freedom to fully engage my inner Bill Blazejowski. All the ideas, notes, pictures of weird things that are momentarily important to me for some unknown reason, the books I want to read, and voice notes from “Chuck to remind Bill to SHUT UP!” go in there. There’s a good chance many of those things will get no further than being stuck in Evernote and left to electronically wither… but I do feel more at ease knowing that I have them... just in case.

The problem is, that Personal Kanban seems to be largely focused on reducing the amount of cultter (stuff I’m trying to work on) and moving to an electronic version may make it tough to continue embracing my inner digital hoarder. Six weeks in, I’ve still not been able to break from using Things every day just to capture stuff that may need to be added to the backlog. It may be dysfunctional, but my addiction to storing everything in a place more reliable than my own head is something I’ve been working on developing for a long time. It is definitely more appealing to me than going back to forgetting things I need to do. I was not sure how much of that I’d be able to let go of, or if doing so was even necessary.

So one of my goals for Sprint 6 was to select a tool and start testing. The first tool I decided to try was Kanban For 1. I’ll be posting about that beginning next week.