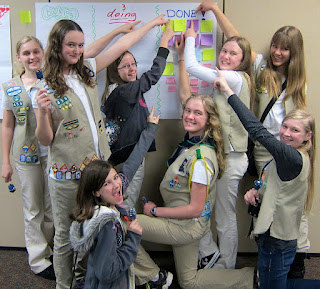 I’ve been writing for a few weeks now about my Personal Kanban Experiment, but actually, it isn’t just MY experiment. My whole family began using Kanban last December and at the start of the new year my wife and I spent a day teaching the basics of Kanban to a small group of Girl Scouts.

One of the main things I do for a living is teaching Agile. I’ve also been teaching people how to manage technology projects using more traditional methods for about 15 years. While I will (hopefully) never say I am expert at it, I do believe I have a fairly good handle on the types of things that make it difficult for people to learn this stuff. I come to each class hopeful, but also ready for the struggles that sometimes come with helping people learn a different way of working. That being said, there has been absolutely nothing I have seen in 15 years of teaching that could have prepared me for that Saturday in January that my wife and I spent at the local Girl Scout HQ.

Among her many other accomplishments, my wife is a Girl Scout Leader and a teacher. She’s never taught Agile before, but she has taught Project Management and she’s been working on a Kanban experiment of her own.  When my wife first asked me about doing the class together I was very excited about it. For one, my she is my favorite person to work with but also, I saw this as a chance to start teaching Agile to a group of young women who were already training to be leaders in whatever they go on to do in life. More importantly, this was a chance to teach them Agile BEFORE they learned waterfall. I was/am giddy at the possibilities this presents for them when they enter the workforce.  My wife was already pretty familiar with all of the kids who attended our class. I was only familiar with one of them – my daughter.  And, as the day drew closer, the terror over teaching kids instead of adults took hold. I was worried that my stories wouldn’t resonate, I knew most of my jokes wouldn’t work and I was pretty sure that at some point I’d slip up and my language would include phrasing that was perhaps a bit to colorful, or just plain weird for the room. 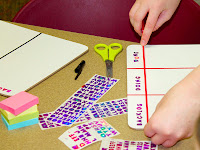 Still, with the possible exception of properly loading the dishwasher, I completely trust my wife and she’s had a lot of experience at trying to keep me from being an idiot, so my plan was to try and do my best to adapt the things I normally teach so that they’d make sense for the Girl Scouts.  We started the day by explaining the basics of Kanban to them. We talked about what a Kanban was, where it came from, how we wanted to have a board with three columns in it. We talked about WIP limits and agreed on some basic numbers we would test out. Then we talked about populating and prioritizing the backlog. AND THAT IS WHERE IT GOT WEIRD!

When I teach CSM classes we spend a good bit of time talking about and around the Product Backlog before we actually build one. We discuss a variety of prioritization techniques and the various merits of different ways of sizing work.  Even though it is something we ease our way into, for many, it is still a struggle.  However, take a small  group of 12-15 year old Girl Scouts, and tell them this: 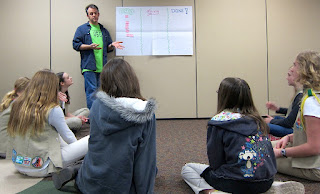 We need a list of all the stuff we want to get done in this session today. We need to list each thing on a separate post-it and put it up here in the column we’ve labeled Product Backlog. Then, we need to figure out which stuff is most important and organize the stuff in the backlog from most important to least important. We can change our minds about the order later, but we need to know what to start with now.

After you utter these four sentences, you may have to be prepared to spend a few minutes brainstorming with them to generate the list. You may also have to establish working agreements (should we list bathroom break, or not?). But, within about 5-7 minutes, you’ve got a full backlog that has been prioritized based on the collective agreement of a group of kids who have all eagerly, and actively participated in the process.

I thought my head was going to explode.

And then, it got even weirder as the Agile-ish behavior took hold…

As they began pulling items from the Ready column into the Doing column, the girls self organized into small groups. (Apparently young Girl Scouts know how to do this instinctively… there may be a badge.)

Then, as they were working, one of the girls was hungry… well, ok.. she wasn’t hungry… she was ABSOLUTELY STARVING TO DEATH! She expressed her need It was acknowledged by the other teams. They examined the board and realized that the only way to pull Lunch into the doing column was to complete one of the tasks that was being worked on. That fact established, they swarmed on the task that was closest to done so that they could move it over and pull Lunch into doing in order to save the life of their team member. With respect to swarming, I’m accustomed to seeing adults have a rational adult discussion about whether or not to swarm, and if so, what to swarm on. I’m completely not familiar with the insane idea that humans could just look at a board of Kanbans, identify the item without discussion and swarm on it without having to talk/debate about it first.

The rest of the day was filled with similar types of experiences. Because we wanted to give them a way to measure their progress towards completing the items in their backlog, we taught them to use a burndown chart… which they updated vigilantly every 30 minutes. Each time a group finished an item on the board, they ALL walked up to move it over together because they were part of a team and wanted to celebrate in the accomplishment. 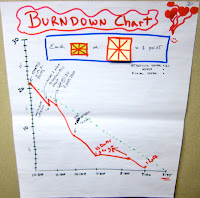 I was at a loss. Where was the frustration, the anger, and the arguments? The blind panic at the idea that items that need to be addressed were not going to be the responsibility of one person (who we could hurl under bus if/when necessary). My wife and I were discussing the freak-ish behavior we were seeing… wondering when, why and how it is that this open-ness gets removed from the equation, and more importantly, how we could stop that from ever happening.  It was a truly amazing day.

I often say that I learn more from the students than they learn from me. Never was this more true than the day my wife and I spent teaching Girl Scouts about Kanban. Not only did I get a lightbulb upside the head with the understanding that this open, collaborative way of working was something that wasn’t born into them, but I came away with the understanding that, left to their own devices, the Agile-ness is already there.  IMHO, what we have to do is find a way to help kids sharpen their Agile nature it and find a way to protect it from the waterfall.

My wife and I are now preparing for a longer project to help provide more agile training and coaching for some of these young ladies as they begin working towards their Gold Award. (The Gold Award is the highest achievement a Girl Scout can attain. It is the Girl Scout’s equivalent of the Boy Scout’s Eagle Scout.) For each of them this will involve managing complex projects that span several months and involve multiple teams on a variety of efforts.  I the Kanban training is any kind of indicator, this is going to be an amazing learning experience for all of us.