Up Jumped the Devil

In the second week of this experiment I added a separate post it to the board with specific goals I had for the week. These are things that in some cases included other work elements on the board, but in some cases not. To me, this was bigger picture stuff I wanted to accomplish. Being as I was on vacation, these were 50% work related and 50% personal. I didn’t accomplish all the goals initially, but this was my first step towards that. (And hopefully someday soon I will finish learning to play that Robert Johnson song.) 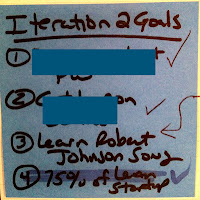 One of the “benefits” of Agile is not that it makes things go faster, but that it makes things you might otherwise overlook much more obvious that you can’t avoid making a choice about them one way or another. For me, this whole process has involved learning a lot about how I (personally) get things done, what motivates me, and as I’ve already mentioned, some of the dysfunction I have built into my work routines.

I should also mention that, for better or worse, I don’t keep a very strict distinction between work life and personal life. I love what I do, so none of what I do is WORK in the sense that it’s stuff I don’t want to do, but there are things that provide me with greater personal satisfaction than others. And at the same time, there is also a kind of negative weight that gloms on to the work items are inherently pleasure-neutral, but become negative because they sit around too long. (This is something I’ll be coming back to in a few weeks when I start digging more into value.)
So, my top observations I have noted for week 2… 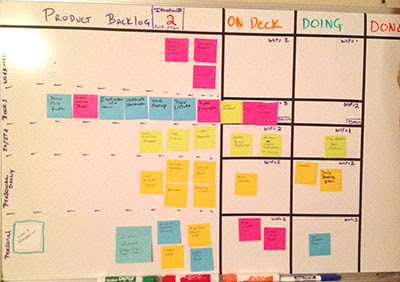 So the most important things I learned in the second week have nothing much to do with Kanban. As far as my practice of using the board, I’m getting better at not obsessing about the cards, but I am maintaining discipline with moving them. I’ve abandoned my attempts to keep them all color coordinated because it doesn’t seem to matter right now – a card is a card.

One issue I do have is that I’m still depending on Things and I’m still working items I enter into Things that I don’t have on my board. This should not be necessary, but I see three main reasons for it:

I’d like to break myself of the Things habit and just do Kanban, but I’m going to have to find a way to do it that is as simple as my use of Things.

I am reprioritizing my board every morning and every afternoon. This is probably overkill, but I am still becoming familiar with the work.

I have accomplished some major work items that were not on the board or in my goals. I would like to become better at making sure everything is on the board. 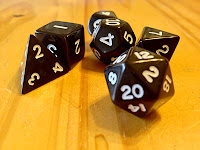 There is one other major change I have noticed since I began using the board. I added a post it last week to remind myself to spend time playing Dungeons and Dragons with my daughter each day. At first, that seemed horrible to me – what kind of crap father must I be if I have to make a task card to play with my kid. But you know what… since I’ve put that card up there. She and I have played every day for 1-2 hours. And it’s awesome. We spend time together, having creative fun, I’m not working and she’d not lost in some video game. So, while my original goal of taking Personal Kanban on was to get better at managing the things I have to do at work, what I’m finding is that it is helping me get better at managing the things I have to do that are not work. This is resulting in me enjoying my life more, making more time for the things I need to do keep sane and making time for my family. My expectation is that this will also have a much greater positive impact on my life as a knowledge worker than I would get from just having a better way to juggle too much at once.
Posted by Dave Prior at 2:10 PM