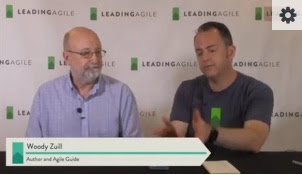 Woody Zuill was at Agile 2016 to provide an update on The State of No Estimates. He also sat in the hot seat to take questions from the crowd during a Stalwarts session.

Woody is the creator of No Estimates and Mob Programming. He is a very inspiring thought leader in the Agile space. Listen in as Dave and Woody discuss his Agile 2016 sessions and upcoming public events. From there, Woody shares some practical questions about how No Estimates actually works and why it can be valuable.

To learn more about Woody, where he will be speaking or the work he is doing, check out his website. You also can follow him on Twitter, or pick up his new book Mob Programming. The illustrations in his book were done by his wife Andrea, who also has a new book out titled, Wolf Camp.

To hear a longer, more in depth interview with Woody that covers his background and how folk music led him towards software, you can find that here.